Groundradar will be at Booth 507 at the Exploration’17 show in Toronto, October 23-25.  In addition, Dr. Francke will be presenting a paper entitled “Realistic Expectations of GPR Performance in Mineral Exploration”, which discusses recent exaggerated claims of radar performance by “megawatt” radars and pseudo-radar technology such as ADR.

Groundradar is continuing to perfect a GPR system for the shallow bauxite at Weipa, Queensland.  Following from initial studies by Groundradar in the early 2000’s, radar technology has advanced sufficiently that a custom system able to penetrate through the full deposit depth with a small, portable, instrument is now possible.  The radar is linked to an RTK-DGPS for accurate positioning.

To improve on the existing Android-based datalogger employed by UltraGPR, Groundradar has developed a custom datalogger with a small wrist-mounted display.  The device can accept data from multiple radar receivers at the same time, as well as from two independent GPS receivers.  The primary GPS is a RTK-DGPS capable of positioning accuracy to within +/- 5 cm over base line distances of 10 km.  A secondary GPS provides back-up position and location beneath vegetation to within +/- 3 m. 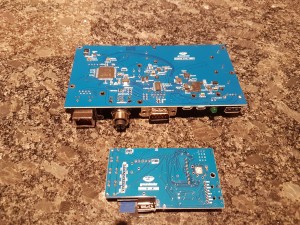