The Ponary massacre was a mass murder of as many as 100,000 people by German forces and Lithuanian Nazi collaborators during World War II.   During the closing months of the war, a group of 80 prisoners from the Stutthof Concentration Camp was tasked with concealing evidence of genocide by disinterring the bodies and burning the corpses.  Knowing that their own fate was extermination and kept in a deep pit each night, a group of prisoners used spoons to dig a 30 m long escape tunnel through loose sand to freedom.  After the war, the location of this tunnel was lost.  Using ERT and UltraGPR, Paul Bauman and Alastair McClymont from Advisian in Calgary, Canada, along with the Israel Antiquities Authority, University of Hartford, Vilna Gaon State Jewish Museum and the PBS Series NOVA located the tunnel.  Further details: 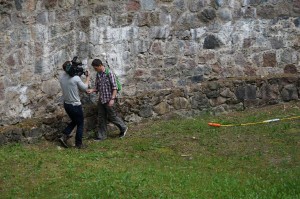