Groundradar successfully conducted an extended trial survey of radar technology over a series of heavy mineral sand deposits in Tanzania.  Penetration to well over 60 m was achieved in the clay-rich sands, with the ability to map the base of sands, as well as thin induration zones near the surface.  In some areas, it appears that the radar was able to map the sand layer more consistently than drilling. 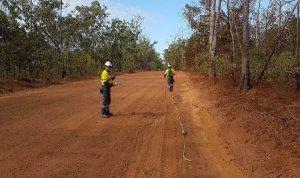